The FIFA World Cup Qatar 2022™ will be played from 21 November to 18 December in Qatar. It will be the 22nd edition of the competition, and the first played in the Arab world.

The draw for the World Cup group phase took place in Doha, Qatar, on April 1 2022 to set the stage for the tournament.

The final three qualification places were filled in June, with Wales, Australia and Costa Rica completing the 32-team line-up.

Here is everything you need to know about Qatar 2022, with full details on the teams, groups, the complete fixture list, the stadiums, how to buy tickets and more. 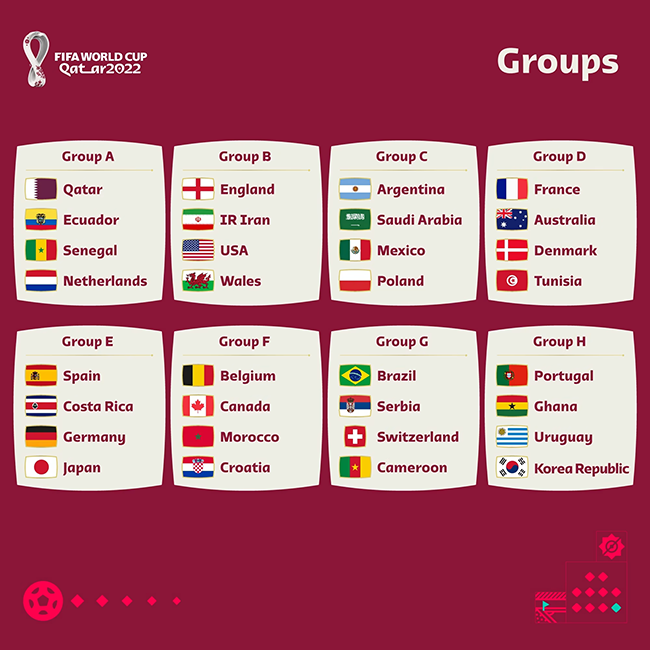 World Cup Qatar 2022 match schedule
The group phase will be played from 21 November to 2 December. The knockout phase will begin with the Round of 16 from 3-6 December.

The quarter-finals will be played on 9 and 10 December, with the semi-finals on 13 and 14 December. The play-off for the third place will unfold on 17 December, one day before the final.

World Cup Qatar 2022 tickets
The ticket sales for Qatar 2022 are currently in the Phase 2. The next one is the Last-Minute Sales Phase, which will work on a first come, first serve basis.

Past World Cup results
Qatar 2022 will be the sixth World Cup this century, click below for full match replays of the finals.

There were 16 World Cups which took place in the 20th century.

World Cup: next edition
Canada, Mexico and the USA will host the 2026 tournament.

Heading to Qatar for the World Cup? Make sure you get your flights to Qatar and hotel bookings in advance for the best prices.